Watching Spike Jonze’s new film, “Her” (2013), one is immersed in an ever-so slightly futuristic Los Angeles. The changes to contemporary urban life are so subtle that we are left with only the vaguest sensation of estrangement. The vibrant colors of the office décor and the protagonist’s cardigans, a skyline borrowed from Shanghai, the preponderance of the virtual and voice activated software stretch just enough into the fictional that the distortion of our normal is barely perceptible.  A gutter-mouthed avatar, a ‘good mother’ video game, and beautifulhandwrittenletters.com, the protagonist’s place of employment, are uncanny precisely because they are as plausible as they are imaginative and ironic. We chuckle nervously, musing that nothing here is all that far-fetched.

Like the vast interiors and broad sidewalks, the story is minimalist but artfully arranged: Theodore Twombly (Joaquin Phoenix), a lonely late thirty-something divorcé and his intuitive operating system (Scarlett Johansson) fall in love.  Advertised as a “consciousness,” Samantha learns to feel the human way. Her ‘consciousness’ develops in response to Theodore, and when he describes the relationship first to a friend and then to an acquaintance, he says that it’s nice to be with someone who is excited about the world.  Jonze, who both wrote and directed the film, appropriates the clichés associated with romantic relationships while transcending them: to love is to re-discover the world, the heart grows, people grow apart, communication can fail where it is most important, the past is a story we tell ourselves, loving is learning.  In his depiction these observations and suggestions resonate sincerely, and hackneyed expressions regain their vitality. Likewise the commonplaces of science fiction, in the distinctions between ‘human being’ and machine intelligence, materialize as honest discoveries: being human is about spontaneous reactions—Samantha is proud of feeling suddenly annoyed, or the experience of inexplicable emotional phenomena—in spite of her impressive processing capacity and mathematical origins, the operating system admits, happily, that she cannot explain why she has fallen in love. And, perhaps above all, being human is about the embodiment that limits and tethers us to the material world, that conditions our consciousness and moves us through space. 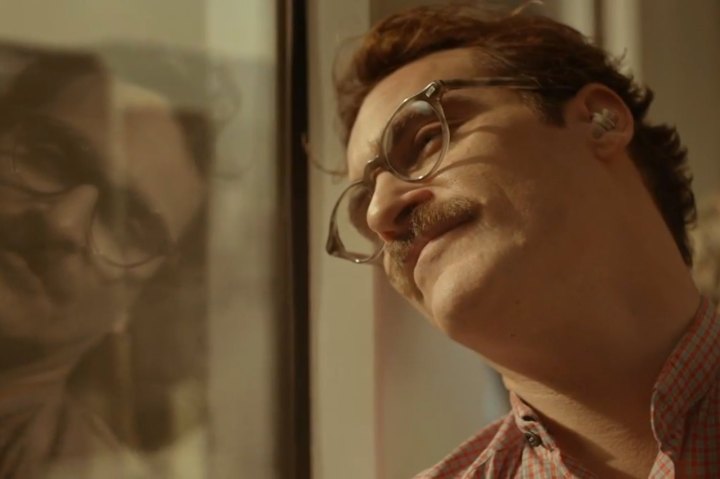 “Her” explores empathy on several levels. Narratively speaking, Theodore writes meaningful letters for couples and families he doesn’t know; it’s his job. Perhaps his ability to imagine a stranger’s emotions predisposes him toward a love affair with a thoughtful voice? On a deeper level however, the director encourages an empathetic response from his viewers. Cultivating intimacy via close-up framing and soft lighting, he makes feeling and growing, both intellectually and emotionally, palpable. The protagonist’s friendship with a neighbor (Amy Adams), his awkward sexual encounters, a first date (Olivia Wilde), and his falling in love draw us in with striking intensity.

Finally, in this film, the future is as nostalgic as anyone who has loved, learned, and lost. Scarlett Johansson’s husky, playful voice resides in a phone that resembles a 1940s-era cigarette case, Joaquin Phoenix wears high-waisted trousers and shirtsleeves, los angelinos travel by train, and hand-written letters make for a profitable business.  Memories appear as mildly over-exposed Super8 footage, and they mingle easily with the pensive close-ups, filtered light, and reflective surfaces in the mise-en-scène. There is no overwhelming or cathartic battle with machines, such as we find in the Matrix series or or the Terminator films; progress is, quite simply, a steady removal from embodiment and feeling. Yet, in spite of all this listless slumber, Jonze presents a film that is ultimately about awakening.  “Her” is a beautiful love story that takes full advantage of the medium’s ability to engage us. The casting is spot on as the power of Johansson’s voice is matched by the expressive potential in Joaquin Phoenix’s face. Together with a delightfully unassuming performance by Amy Adams, they show us what being in the world is all about.

Suggested Viewing: “Her” recalls the science-fictional premise and themes of action films such as Mamoru Oshii’s “Ghost in the Shell” (1995) and Ridley Scott’s “Blade Runner” (1982), but it also evokes the thoughtful mood, intimacy, and everyday enlightenment found in Sofia Coppola’s “Lost In Translation” (2003) or her “Somewhere” (2010). For an ‘art house’ experience, you might try Wim Wenders “Tokyo-Ga” (1985) or Andrei Tarkovsky’s “Nostalghia” (1983). Working with screenwriter Charlie Kaufman, Spike Jonze directed the strange and cerebral comedies “Being John Malkovitch” (1999) and “Adaptation” (2002). He also wrote and directed an adaptation of the popular children’s book, “Where the Wild Things Are” (2009), and he is a creator of the “Jackass” series for MTV and the Jackass films.